After our troubles earlier, we finally reached Akaroa around 11:30 am. Akaroa, a former French settlement, is a small town on the Banks Peninsula. It has that sea-side-town feel to it, fish and chips being served, a nice harbour area to walk on, and so on. But most importantly, it is famous for hector dolphins, the smallest dolphin in the world and only to be seen in New Zealand. I think it is a must do if you have a spare day or two in Christchurch. 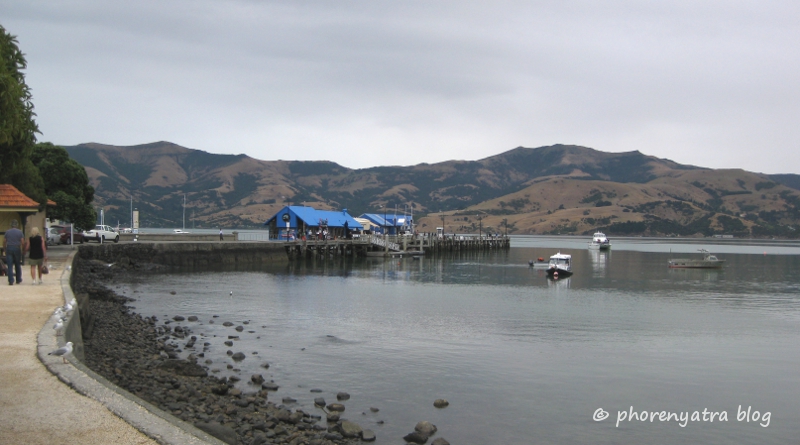 At Akaroa, our French Connection bus driver dropped us off at Beach Road near the boat pier, and said that he would be back at 4:15 pm to drive us back to Christchurch. Since we had still not booked our dolphin cruise, we went straight to Akaroa Dolphins and booked a cruise with them. We had no problems getting on the 12:45 pm cruise, as there were plenty of spaces available. It was a little surprising to see that, because it was a Saturday. Maybe the cloudy day had something to do with it. But we did not complaint, as we were able to make our last minute booking. There are two well known companies that do the dolphin cruise and also the swim with the dolphins tour (yes, you actually put on a wet suit and swim in the water and dolphins playfully swim around you); one called Black Cat and the other known as Akaroa Dolphins.  Black Cat is the more famous/bigger option, and it has bigger boats. This of course means more people on every cruise. On the other hand, I had read earlier that Akaroa Dolphins offers a more intimate experience, with smaller boats and lesser people on it. So we went with Akaroa Dolphins, and it really was a good decision. We would see later that there were hardly 12 to 15 people on our boat and we got to stand at the edge of the boat from where we had a clear view of the water and marine life in it. 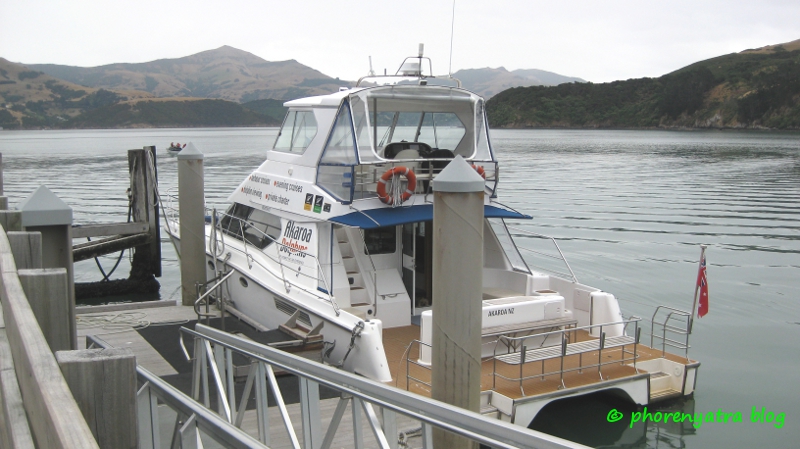 With boat tickets in hand, we now had some time to kill before our cruise departed. So we decided to have lunch. Do not worry, the cruise boats do not make you sea sick, and it is ok to eat before going on the cruise. The restaurant scene in Akaroa is mainly located along Beach Road, along the harbour. There are also some interesting places on nearby Rue Jolie and Rue Lavaud. There were a range of options, from cafes to italian kitchens to sea food joints. But we decided to go for some Thai food at La Thai. It was not the greatest meal, as I have had better thai food elsewhere, but it was enough to fill us up. The one positive for us was that La Thai had free wi-fi for customers. So I was able to make a quick skype call to the i-site at Christchurch airport and check on the status of a problem that we faced previously. I was informed that since it was a weekend, they would have an answer for me by Monday. All I could do at this point was wait, and in the meantime, enjoy Akaroa!

We walked to the pier from where our boat was to leave. The boat was nice and clean. It had powerful engines that could make it go quite fast as well. On board were husband and wife owners Hugh and Pip, along with their dog Hector. The dog, very cute and a popular prop was photo crazy Chinese tourists, was there for a reason. You see, dogs can hear higher frequencies than us humans. When hector dolphins are about to make themselves visible from the water below, they make a sound at such high frequencies. So when Hector the dog hears them, he starts barking and running near the edge of the boat, in turn alerting the people on the boat where the dolphins are about to be seen. A clever way of man and dog working together!

(lively Hector on board the cruise boat) 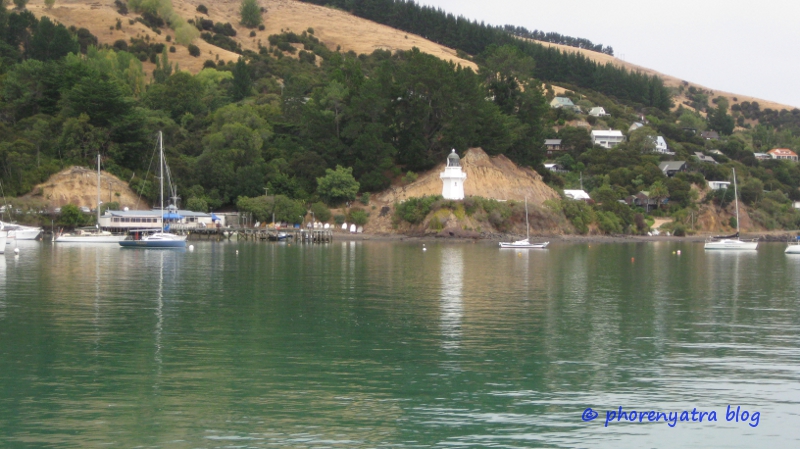 (Akaroa lighthouse and other boats)

(The lighthouse seen as we leave the pier)

(view from the edge of the boat) 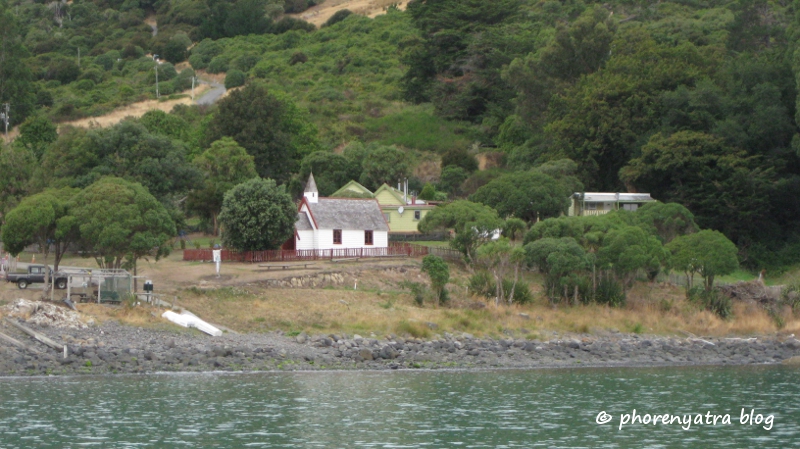 (a famous house just south of the pier)

During our two hour cruise, we saw quite a few hector dolphins and some fur seals. As a bonus, we even saw one penguin. We also saw various vegetation/trees, landscapes, and rock formations around the harbour area. After an exciting two hours, we headed back to the pier. It was an awesome day of wildlife viewing and one that we thoroughly enjoyed. We were done with the cruise by 3:30 pm and so we went for a walk on Beach Road, exploring various shops and taking in the picturesque harbour. After a windy boat ride, it felt awesome to have some killer hot chocolate at L’Escargot Rouge, a nice little coffee shop along the harbour. By the time we were done, it was time to head back to the pick-up point for our drive back to Christchurch. A day which started with drama and chaos ended quite positively, as we got close to nature and unique marine wildlife that is so typical of South Island.

(Start of the Pacific Ocean, the farthest point of the cruise) 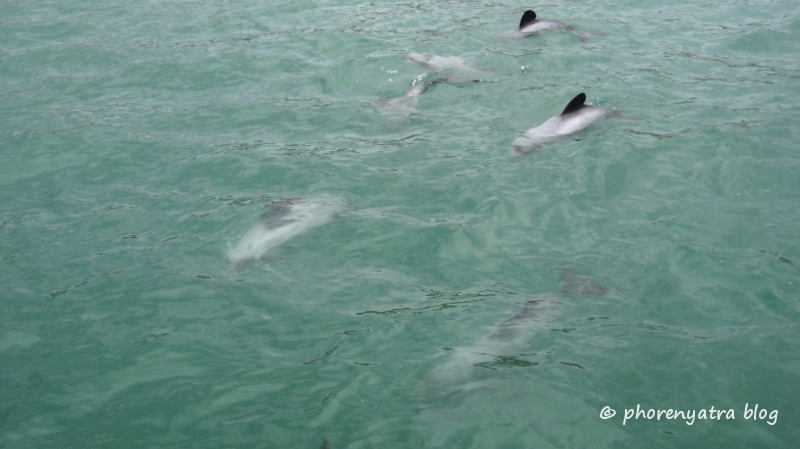 (a pod of Hector Dolphins) 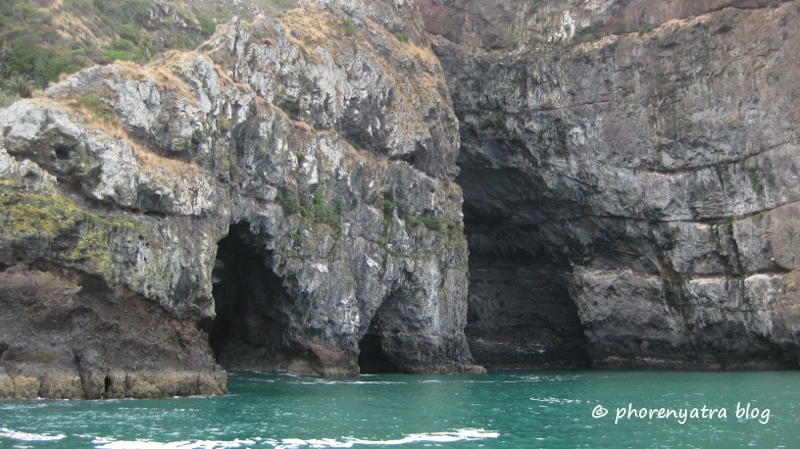 (caves around the harbour) 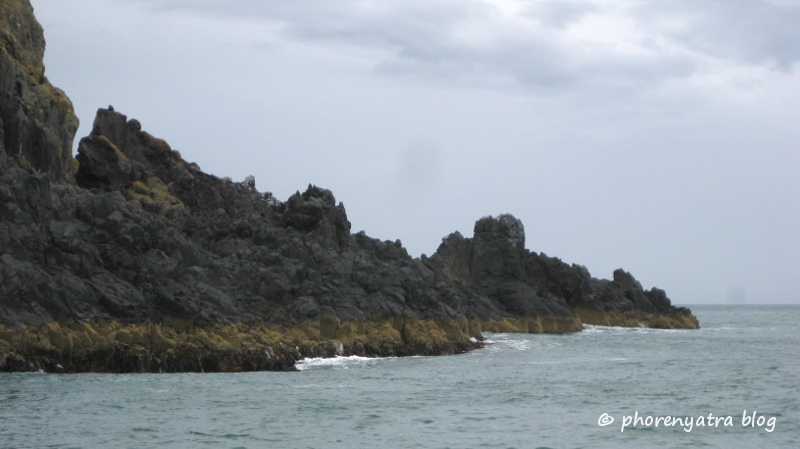 (interesting colour of various layers of volcano and rock formations) 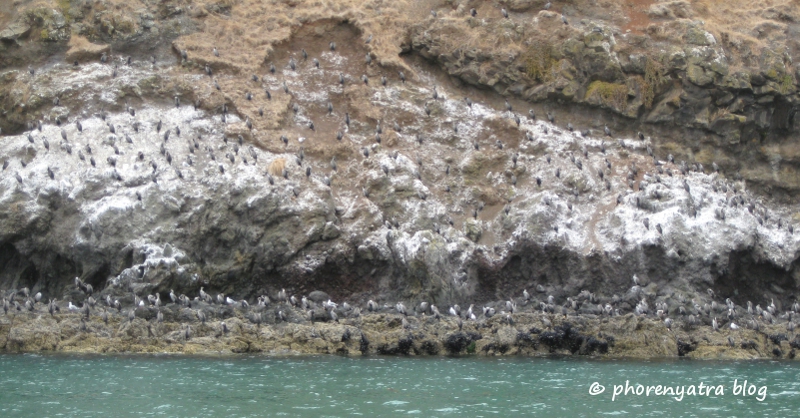 (elephant rock, looks like an elephant trunk for sure!)

(fur seals, chillin’ on the rocks) 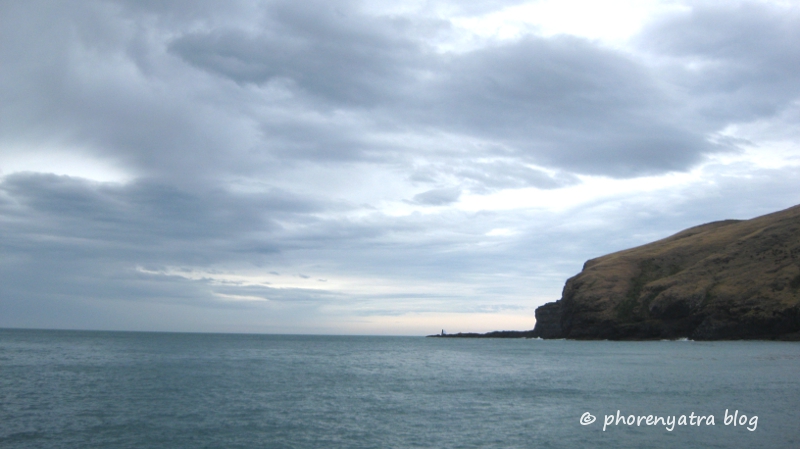 (amazing hot chocolate after the cruise)