After finishing up our amazing local breakfast, we headed out to the final destination of our Vadodara trip – the magnificent Laxmi Vilas Palace. It was the last day of our short weekend trip and we wanted to make the most of it. So, we saved the best for last. Laxmi Vilas Palace is an absolute must if you are anywhere near Vadodara. It is one of the best maintained palaces in India, and also one of the largest private living spaces in the world (4 times the size of Buckingham Palace!). Besides the large size, the palace’s grand feel comes from its beautiful Indo-European architecture, an ornate Darbar hall, Rajasthani sandstone covered walls, and a whole lot more. All-in-all, it took us a good 2 hours to go through a guided audio tour of the palace.

We took an auto rickshaw to the palace, and reached the premises at around 9:30 am. We had to sign into a registrar at the gate (entry was from gate # 2) to log our entry. The guards said we were the first visitors of the day! That was great to hear, because it meant that we pretty much had the palace to ourselves. Going early is hence recommended to avoid crowds. Next, we bought tickets – Rs.200 per person and that included an audio set for a guided tour. The audio tour was available in English, Hindi and Gujarati languages.

(walking into the palace)

(beautiful door at the entrance of the palace)

After picking up our headsets, we walked straight into an open lawn. There was a golf course adjoining the lawn area. From the open area, we were able to get a good view of the front of the palace. The left and right side of the palace looked distinctly different. The reason for this difference can be attributed to the type of resident living on each side of the palace. One side was for women and the queen, while the other was for ministers of the king. The king stayed (and still currently does) in the middle portion of the palace. 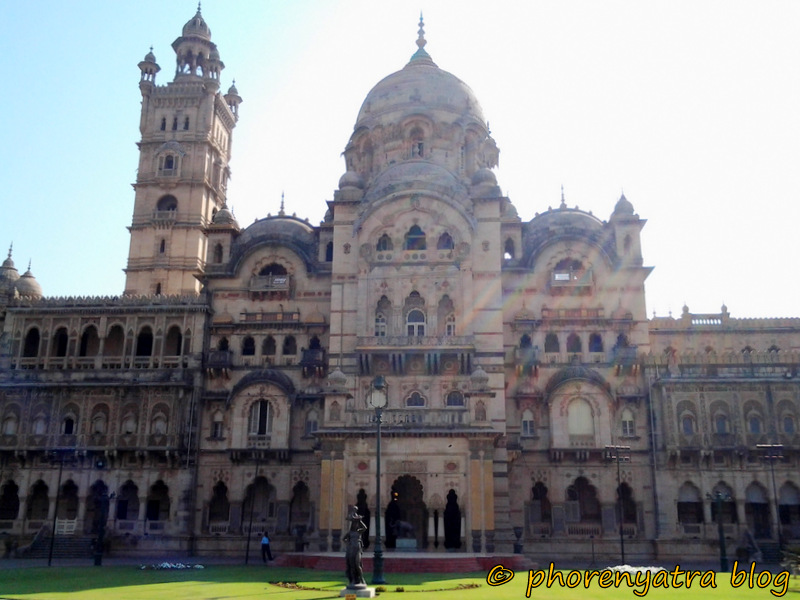 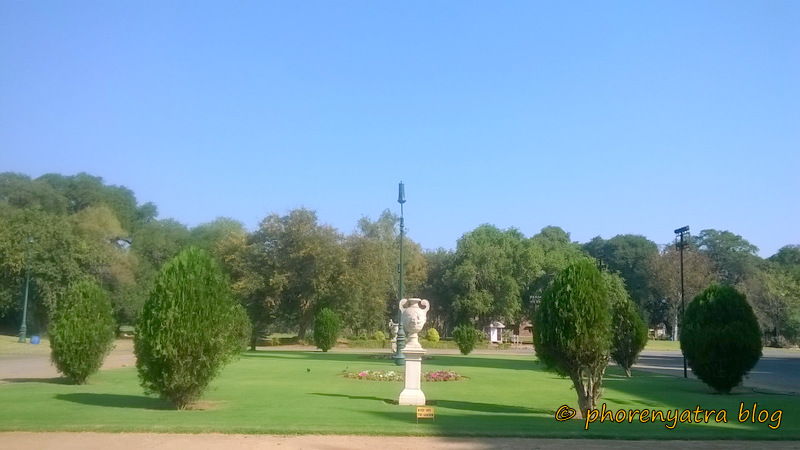 The guided audio tour worked out very well for us. There was a spot in every room in a particular sequence. All we had to do was follow the numbered spots and listen to that chapter number on our headsets. We learned a lot about the history, the importance and purpose of every room. There were about 11 spots in total. We even got to know who made some of the famous sculptures and statues, and what each one’s expressions meant. It was a great insight into what life must have been like during the ruling days of the royal family of Gaekwads. 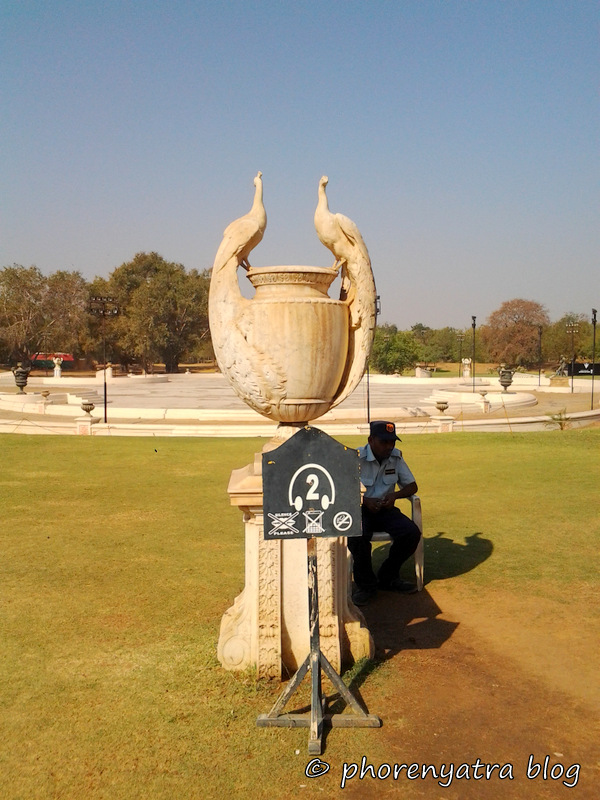 (audio tour stop #2 with an events area behind)

Some of the most interesting areas were the Gaadi Hall (throne room), the Shastra Hall (armoury) and the Durbar Hall (events room). The armoury had swords of famous Maratha rulers and one of Mughal ruler Aurangzeb. The Durbar Hall was just magnificent with Belgian stained glass of Indian gods (this was the first time Indian figures were depicted on European stained glass). There was no photography allowed inside the palace, and hence we could not get any pictures of the magnificent interiors. Following our audio tour guide, we walked to the back of the palace through an Italian courtyard, which was decorated with water fountains and roman sculptures of human figures, all in pristine white marble. 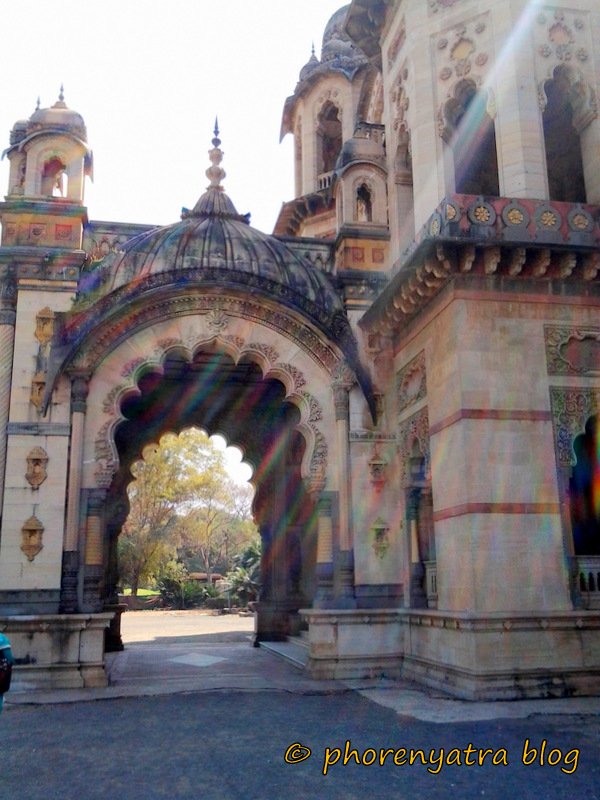 (back of the palace with lovely carvings)

The back of the palace was beautiful, with Mughal-styled carvings around the windows that looked out. However, the most colourful and incredible sight was a piece of murano tiled mosaic, depicting an angel, the king and the queen along with a servant of the king. The spot with the Murano tiles was the last stop of the audio tour, and thus we reached the end of our visit to the palace.

(beautiful Murano tile mosaic on the back wall of the palace)

We had read about the FatehSingh museum, which was also located at the palace complex. We asked the security guards for directions and were advised that it was located at gate #4, which was a short 10 minute walk from gate#2. So, we decided to check it out. Through the walk was not long, it was along unpaved dusty roads and by the time we reached the museum, our face was covered with the dust that kicked up everytime a car drove past us on the dusty roads.The museum itself was nothing too great, and turned out to be somewhat of a disappointment considering all the dust we had to breathe to get there. But overall, it was an amazing experience to walk through the magnificent Laxmi Vilas Palace and understand the time and effort that went into creating such a significant monument. Getting an insight into what royal life must have been like was worth every minute of our time spent at the palace.

It was time for us to bid Vadodara goodbye, but we still had time for one last meal. We went for a Gujarati thali at the much hyped Mandap restaurant inside Express Hotel. The thali was good, but nothing spectacular. It was the usual menu of 4 vegetables, couple of sweets, some farsan items, roti, dal/kadhi and rice. Perhaps we should have gone there for dinner, as the menu would have been different. While eating our thali, a restaurant server came out with a tray full of Matka Rabri (small pots filled with creamy milk-based dessert). He asked us if we wanted any. We were already served two sweets, but we thought the rabdi must be part of the thali and so we picked one up. Gujarati cuisine has a reputation for high sugar use, so we assumed that the thali came with a lot of desserts. However after finishing our meal, we found out that the rabdi cost extra as it was not part of the thali! We learned our lesson that when unsure about something being served at a thali restaurant, it is always wise to ask if an item is an extra or if its included in the thali.