Having reached Leh after a long overnight halt in Delhi, we left the airport and headed to our homestay. We had selected Tukchu Homestay, as it had received some solid reps online. In fact, we  did not know about this place at all. It was only when a couple of people asked some questions about it on forums did we find out about this interesting place. It is located right below Shanti Stupa on Ecology Hostel Road. It was quite far away from the main city center (at least 20 min walk) and the temperature at the homestay was also a bit cooler than at the city center, as it was on a height compared to the main city area. But the views from the homestay were quite amazing, which was one of its main selling points of this place.

(driving to Tukchu Homestay from the airport) 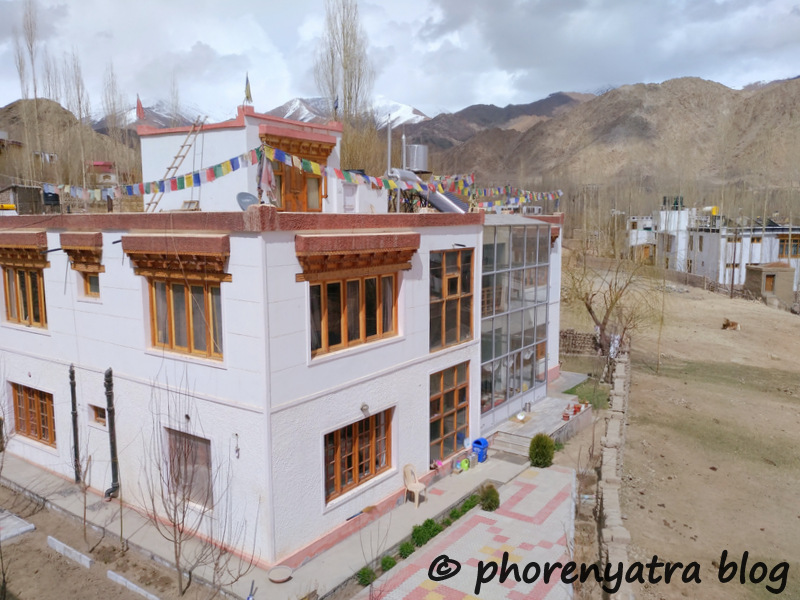 The other good thing about our homestay was the local experience that we got by staying with a local family. As we reached Tukchu, we were warmly greeted by Mr. Tashi – the owner of the homestay, his wife and one of his relatives who was from Kargil. We introduced one another and were then led straight to our room on the first floor. First floor rooms were great because we got a decent view outside, but the view wasn’t a whole lot different from a ground floor room. The only important thing was to get a room facing the city and the mountains. It was quite early in the morning, and the guests in the adjoining rooms were still asleep. We all freshened up, took a nice hot shower and headed downstairs to get breakfast. The homestay had a nice dining room with traditional table and floor level seating. The homestay’s cook fed us some hot freshly cooked parathas, which felt brilliant after a long journey. After breakfast, we spent some time in the living room of the house, which had glass windows all along the front. A small portion of the ceiling was also glass. That was great because the intense sunlight of the Himalayas would penetrate through and warm up the room. While sitting in the living room, we met Mr. Tashi’s 92 year old father, who was a famous historian in Leh. In fact, he had traveled quite a bit with the famous Dalai Lama, and he told us some interesting stories from past decades. We even saw some pictures of him with the Dalai Lama. It was great to learn a bit about Ladakh’s history from someone as experienced and educated as him. 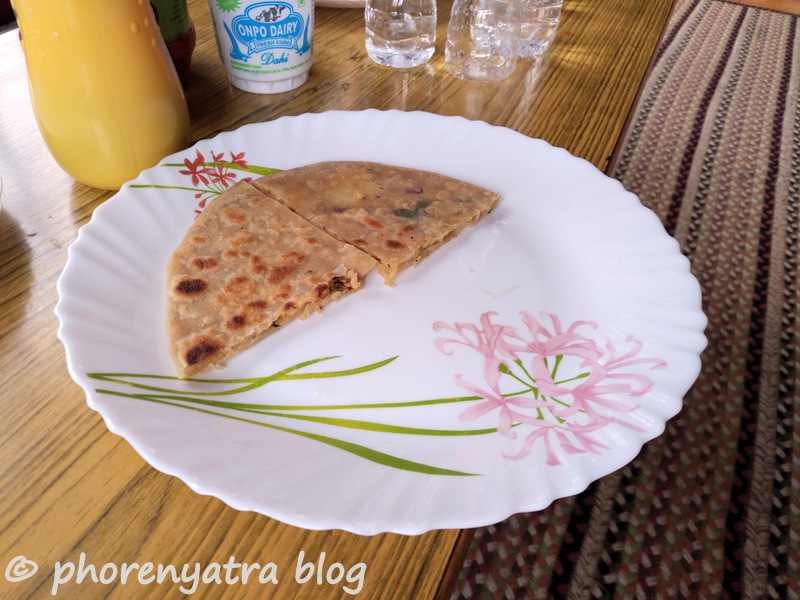 (hot parathas for breakfast at Tukchu)

Mr. Tashi left the homestay later in the morning, as he was also a full time employee with the government telecom company BSNL. Before he left, I asked him about securing permits for our travel to various places around Ladakh. The government of India had for some reason re-started permits for Indian citizens to many of the famous tourist areas starting April 2017. These permits were discontinued for Indian citizens since 2013, but then restarted in 2017. So, we had to get our permits just like all the foreign visitors. And more importantly, we also had to pay fees for those permits. I had read beforehand that one can visit the DC office in Leh in-person to get these permits. But Mr. Tashi advised us not to do so, since it was our first day in a high-altitude location, and we would be better off resting at the homestay. Instead, he took all my documents and asked an agent to get the permit made for us. We paid Rs.400 per person, and Rs.20 per day per person for all the days that we were planning to travel. Additionally, the agent also charged us an extra fee of Rs.100 per person to get the permits made. Considering the convenience of getting the permits done while sitting at the homestay, it was well worth the money to get them made via the agent.

While it was clear and sunny for most of the morning, the weather suddenly changed around 12 noon, and it got real cloudy. Within a few minutes, we started seeing light snow fall from the sky. It was absolutely incredible how fast the weather had changed. We could feel some windchill and out of nowhere, there was heavy cloud cover everywhere. If that wasn’t enough, the snowfall was all done and it was back to clear sunny weather in about 40 mins! There is a funny saying in Ladakh that there are two things that you just cannot anticipate: the fashion trends of Mumbai and the weather of Ladakh. That seemed so true at that moment.

The rest of our day was pretty uneventful. The cook at Tukchu made us some lunch, and then we caught up on some sleep. Mr. Tashi showed up later in the evening with our permits, and he even managed to get the internet up and running. Mr. Tashi’s son tempted me to go out for a short session of front-yard cricket. Though I did not run around too much while playing some light cricket with him, I would not recommend playing or doing any physical activity on the first day in Leh. Rather, it is advised that one should  just stay indoors and relax. However, relax does not mean sleep or bed rest, as sleeping all day will mess up your sleep cycle. Simply resting and not doing a whole lot will work just fine. We had been taking Diamox tablets since the previous day (when we travelled to Delhi airport), and we continued to take them (twice-a-day) on Day 1 as well.

Mr. Tashi’s wife, his relative and everyone else was back by late evening, and they cooked us some good simple dinner. Another benefit of staying at a homestay is getting simple home cooked food – good for the stomach and good for your health. We ate and were done for the day, rested adequately and ready to begin our sightseeing program from Day 2 onwards. More on that in the next blog post.