Day 4 was a really important day in our trip and also a highly anticipated one. We were very excited to be visiting Turtuk Village, the last border village open to visitors before the Pakistan border. Turtuk Village is still not visited as much by tourists as it potentially could be. One of the reasons might be that it takes an extra day out of your trip to visit it and return back to Nubra Valley. In fact, we noticed more non-Indians than Indians when we visited. It must be one of the most under-rated locations in Ladakh. We were originally not planning to go there either. But once we noticed recommendations from people on TripAdvisor to go there, and also when some of our family and friends who had visited Ladakh encouraged us to go there, we belatedly decided to take a day trip to Turtuk.

We left from Hunder at around 8:30 am. The roads were empty and the drive got off to a good start. The only traffic jam that we met was the classical “Himalayan” traffic jam – a bunch of yaks blocking the road. We managed to make our way around those fellas and headed towards Thoise. Thoise is home to a fairly large Indian air force base. Interestingly, we spotted an Air India plane taking off from the base. It must have been a special chartered flight, as Thoise is not a commercial airport. Within an hour of driving, the road started to run along Shayok river. It was a little overcast that day, and the grayish light was making Shayok look emerald green in colour. It was just beautiful. 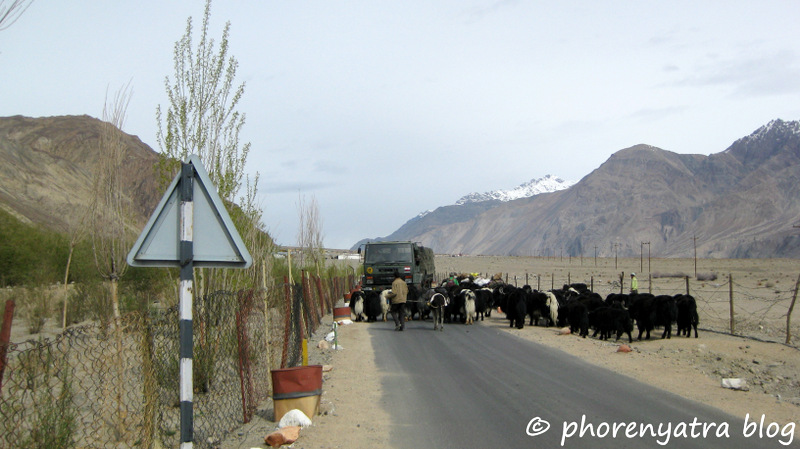 (road to Thoise air base)

(An AirIndia plane taking from from Thoise) 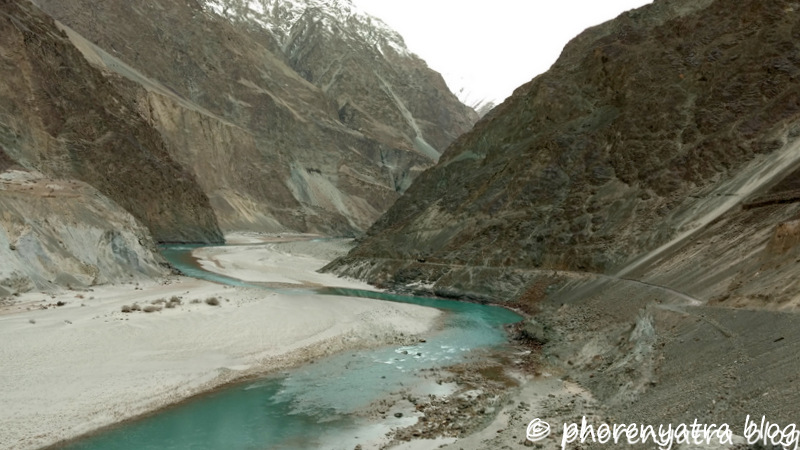 Another thing that was stunning was the colour on various mountains. It just kept changing as we went along. Some mountains had multiple shades of brown, while some had a greenish tinge on the rocks. The winding roads, the green Shayok river and the colourful mountains made this journey from Hunder to Turtuk one of the best of our trip. The scenery was especially amazing near Changmar village.

(the colours of the mountains was an absolute treat to watch) 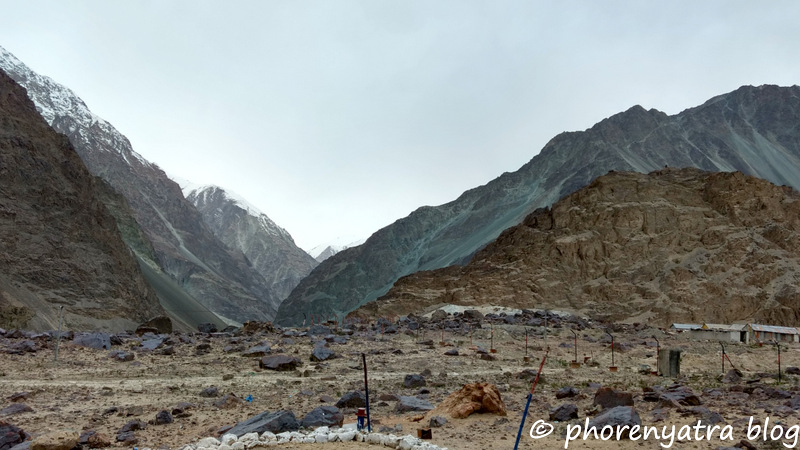 (greenish tinge on the mountains) 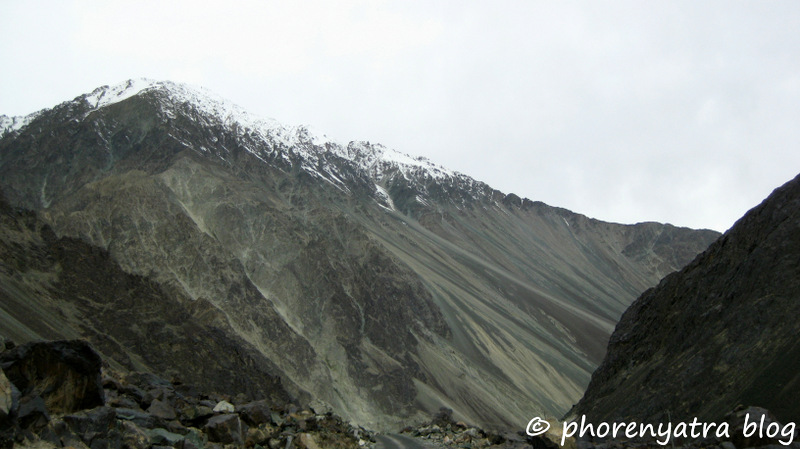 (shades of brown on the mountains)

As we drove further past Changmar, we had to stop at a check-post where our permits were checked. We spoke to an army guard who jokingly said that if we get into Shayok river which was flowing on the side, then we would end up in Pakistan! We noticed lots of army camps along the highway after the check-post area. After some time, our driver informed us that the roads we were driving on were actually in Pakistan prior to the 1971 war. Some patches of the area felt very remote, with hardly any sound or any person visible. There were just mountains and rocks everywhere, and an occasional army camp would show up every now and then. 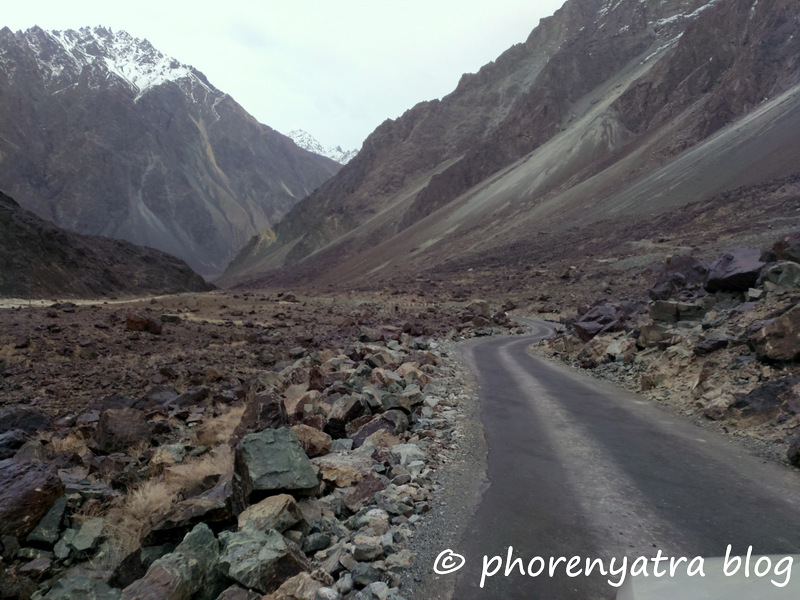 (nothing but rocks along the lonely road)

After some more driving, we were very close to Turtuk and reached a village called Bogdang. At this moment, the entire feel of the place just changed. We felt like we were in a different state. The people looked different, their faces looked different and their dressing styles were different too. The area had a very Islamic feel to it. The Buddhist/Ladakhi people were nowhere to be seen. We were in what locals considered Baltistan. Gilgit and Baltistan is a region in the Indian state of Jammu and Kashmir. Most of G&B is under Pakistani control and there is only a sliver under Indian control. Bogdang and Turtuk are part of this sliver. We drove through the narrow road along Bogdang village as our driver said hello to a couple of locals who he recognized. We passed an army-run school where we saw lots of very cute Balti kids, with red cheeks and unique facial features. We drove further and after a few minutes, we reached Turtuk village. It took us a total of 2 hours since we left Hunder to reach Turtuk.

When we reached Turtuk, most of the hotels, guesthouses, and shops were closed. Apparently, the tourist season had not begun just yet. We were told that it begins in mid-May, and that is when everything starts opening. April end is when renovation works go on. Our driver dropped us near the famous bridge which connects two sections of Turtuk village. We walked across the bridge and entered Turtuk village. We noticed farmers and labourers, walking up with their tools. The view from the path leading into the village was just great, with mountains, greenery and Shayok river in the background. As we walked further into the village, we met two local kids who asked us for some chocolate. We did not have any with us, and we felt disappointed to not be able to give them something. But we carried on, and soon found a place called Friend’s Cafe, the only restaurant which was open in Turtuk! In fact, it had opened only 1 day before we were there.

(view from further up) 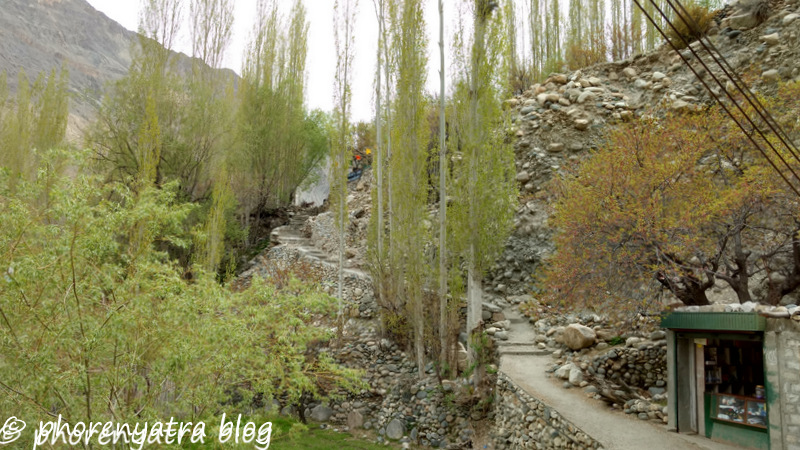 (path leading up into the village) 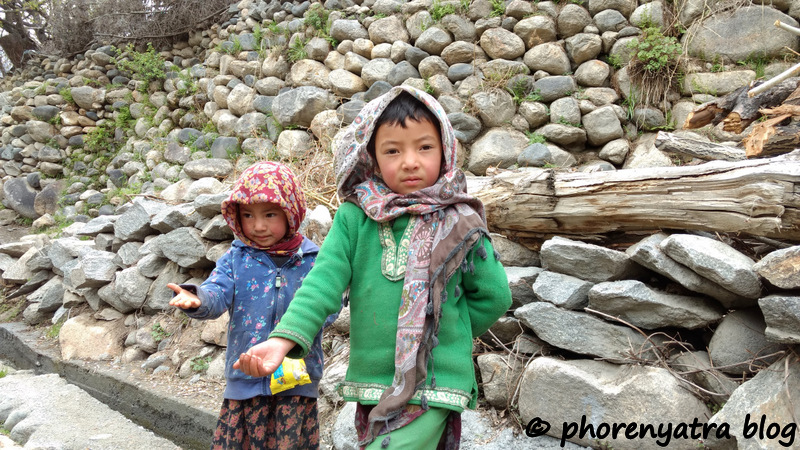 (these kids asked us for some chocolate!)

The walkways through Turtuk village are narrow with water flowing on both sides. I was not sure whether this water was glacial water or sewage water. The feel of the village was just brilliant: rural, charming and very Himalayan. There were vegetable gardens, small houses and lovely Himalayan magpies flying around. Some trees had blossoms on them, and we were enjoying our walk through Turtuk. After some time, we reached Maha guest house. The guest house was not open, but the owner suggested that we go and meet a person named Hussain. He pointed us in the direction where Hussain would be found and we walked along that path. On the way, we came across lush green wheat fields, where we spoke with some of the ladies who were working the field. Turtuk village was indeed very special. Finally, we found Hussain, who was busy constructing a new guest house right on the edge of the plains. Hussain greeted us very warmly and started talking about the history of Turtuk. He took us to one of his partly built structures and we sat there, listening to all the stories which he narrated to us.

(walkways inside the village)

(a typical house in Turtuk) 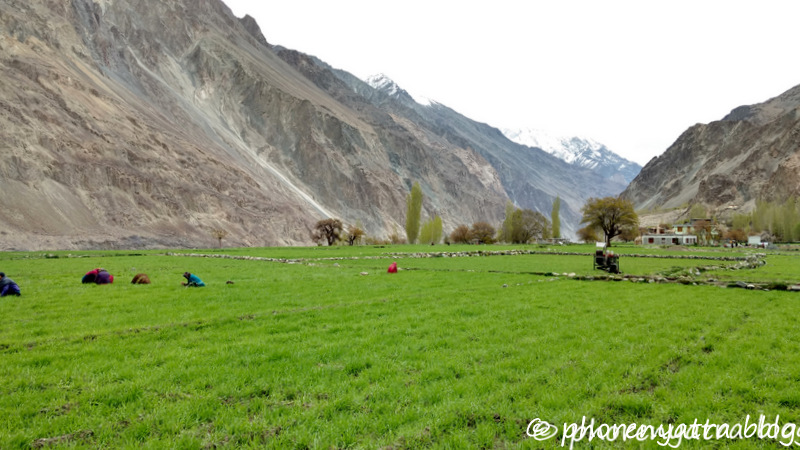 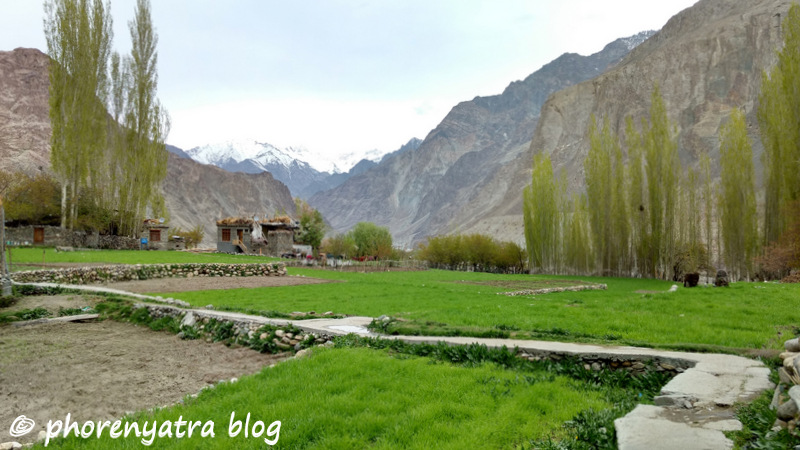 (what a view this is) 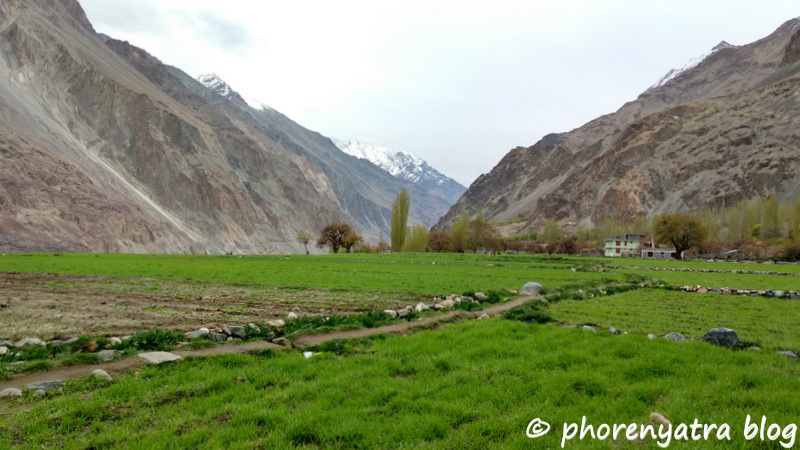 Hussain told us about how Turtuk found itself in another country overnight (during the ’71 war) and how the locals suddenly found themselves and their families separated. He talked about how the Indian army works with them in difficult times and helps them improve their lives. We learned a few things about apricots too, especially how to spot the good ones from the artificially sweetened ones. The view from his guest house was just fabulous, with green fields below and the bluish-green Shayok river running in the background. Hussain then handed us a pair of binoculars and showed us the Indian and Pakistani bunkers on the mountains just behind the village. These bunkers were very close to each other, looking eye to eye. It was truly an incredible sight. 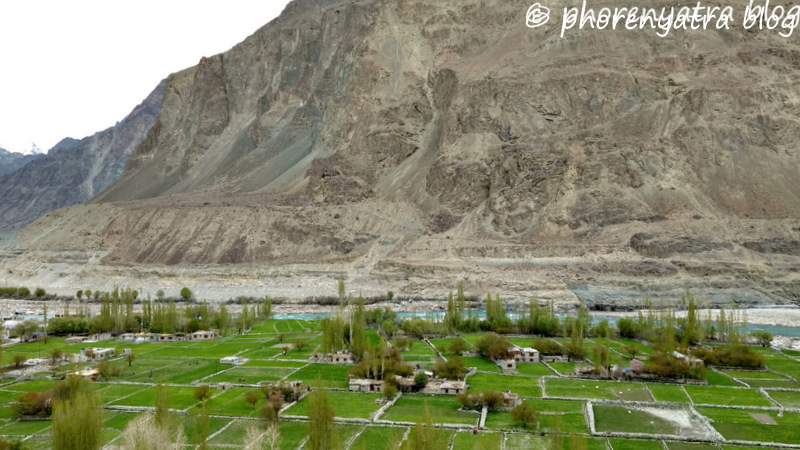 (the fabulous view from Hussain’s guesthouse) 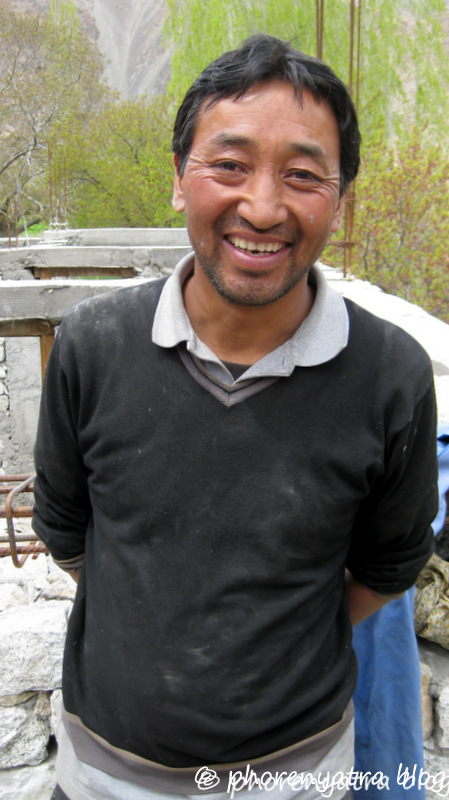 (Hussain Baig – the star of Turtuk)

Our time with Hussain simply flew by. We must have easily spent over an hour and had no clue of the time until our driver showed up. Our driver was keen to be on schedule since he did not want to be stuck in any rock-slides on the way back, which sometimes tend to happen late in the afternoon due to high winds. So, we wrapped up our learning session with Hussain and headed to Friend’s Cafe for some lunch. We wanted to visit Turtuk Monastery which Hussain had recommended, but we simply did not have the time to go there. One has to walk along a hill to go to the monastery and it takes at least 20 odd minutes to get there. There was even a waterfall point which we could not visit because it was too early in the season and the waterfall had not started flowing yet. So, we ended up going straight to Friend’s Cafe. The location of Friend’s Cafe was pretty amazing. It overlooked the Turtuk bridge and mountains. All seating was outdoor and they had only 2 things on the menu – Noodles and Maggi. I was very disappointed with the food because I was desperate to try some local Balti cuisine. Unfortunately, none of the guest houses or restaurants were open and Friend’s Cafe also did not have any Balti food. We realized that April end was a little too early to fully enjoy a trip to Turtuk. Mid-May or later would be much better.

(spring blossoms all around)

After lunch, we crossed the bridge and went over to the other half of the village. In that half of Turtuk, there was a blacksmith shop, a museum, and a mosque which one must visit. Since we were short of time, we skipped the museum. Hussain had informed us that the mosque in Turtuk is unique. Apparently, it is the only mosque which has something about 5 different religions inside the premises. It was not just an Islamic mosque. When we went there, we were not sure if women are allowed inside. Since some of our traveling party were women, we decided to not go inside as we did not want to create any misunderstandings. Instead, we had a look from the outside and then made our way back to our car. As we were returning, we met a group of children who kindly posed for a picture. Thus our time in Turtuk came to and end. What a trip it was, definitely one of the highlights of Ladakh for us.

(The mosque at Turtuk) 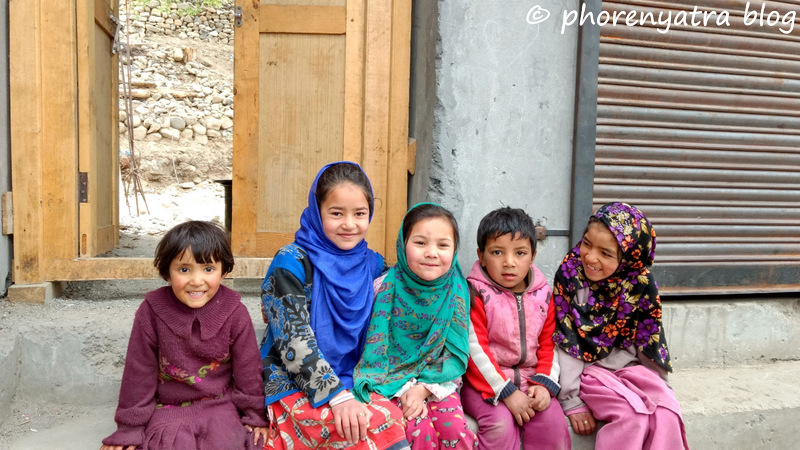 We headed back at around 3 pm and reached Hunder without facing any rock-slides. We hung around in the hotel lobby until dinner time and then went straight to our rooms post dinner. The next day was again going to be a big one as we were visiting the number one location of Ladakh – Pangong Tso! More on that in the next post.

One thought on “Day 4 – Turtuk Village”