Summers bring extremely hot weather in India. Places that are near the coast are hot and humid, while cities and towns away from the coastal areas get really dry heat. Temperatures can regularly soar above 40 degrees or even 45 degrees Celsius. April to about mid-June tends to be a very high-temperature season throughout most of the country. But, there are a few places that one can visit to beat this extreme heat (and in some cases the humidity as well). Summer is also a time when children are on holiday in schools and it is a great time to travel if you are a family. The following are some of the top destinations that you can visit throughout India during the summers. 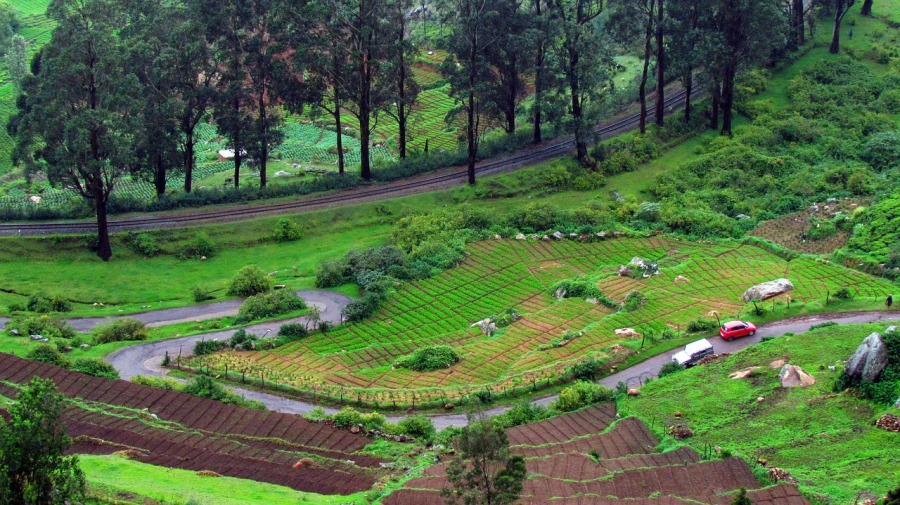 One of the most popular hill stations in southern-India is Ooty. The word “Ooty” is actually a short form of this place’s real name “Ootacamund”. Ooty is located in the Nilgiris mountain range. The landscape here is that of rolling hills with a lovely green cover. There are quite a few tea gardens and estates here as well. The temperatures are a pleasant 15 to 20 degrees Celsius. Ooty has always been a preferred summer destination for many Indians. 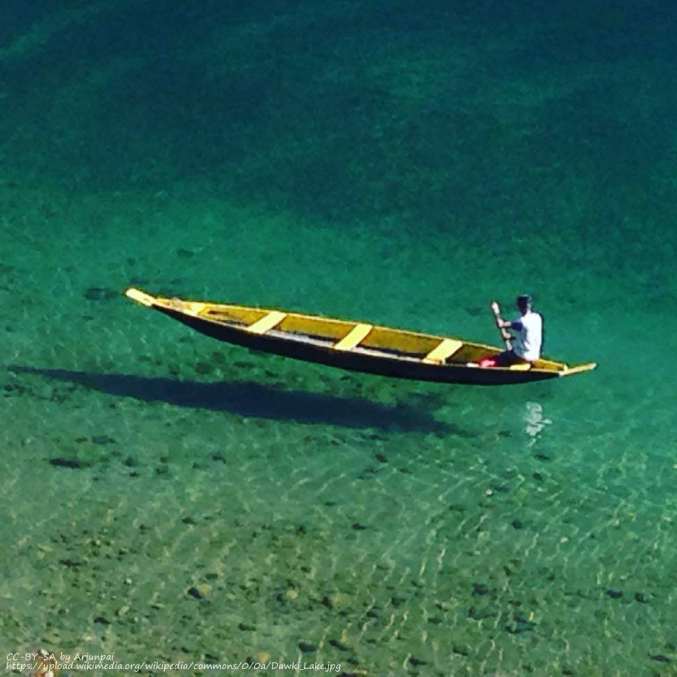 The north-east has been gaining a lot of popularity among Indian and foreign travelers. The state of Meghalaya is one great option. You can travel to Shillong, the capital, where the average highs in April and May hit 23 degrees Celsius and the lows go to about 15 degrees Celsius. You might encounter some rain but the really heavy rain comes in June and July. April and May is still the shoulder season when it comes to rain. From Shillong, you can visit Dawki (the picture above) to check out the mesmerizing greenish-coloured crystal clear waters. You can also go to Umiam Lake and Mawlynnong, considered to be the cleanest village of India. Nongriat is also worth a visit, as it is the location of the famous Double Decker Living Root Bridge.

Tawang is perhaps the most famous place in Arunachal Pradesh. Besides the famous monastery, you can take road trips to Sela Pass and Bum La Pass. In April, there is a good chance that you will see some snow on one of these mountain passes. You can also visit Sangetsar Lake, which is known as Madhuri Lake because the movie Koila was shot here and Madhuri Dixit was in that movie. Temperatures in Tawang range from 17 to 20 degrees Celsius during the day to a chilly 3 to 7 degrees Celsius during the night. There is no better way to beat the heat than drive through some snow on the mountain passes of Arunachal Pradesh. 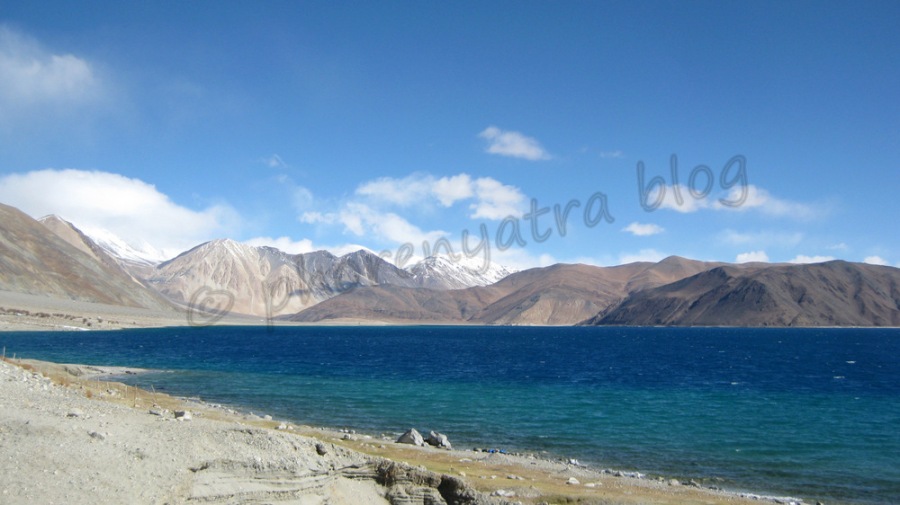 Ladakh has got to be one of the most scenic (if not the most) places of India. Pangong Lake (pictured above) is the most famous attraction in this district of Jammu & Kashmir. The lake normally melts after mid-April. So, a trip around April-end/May is a great time to visit Ladakh if you want to save on some money and beat the crowds. The peak season begins after the first week of May. Temperatures can range from low single digits to negative during April-end/early-May. Besides the lake, you can visit Nubra Valley and visit monasteries around Leh. Ladakh is perhaps one of India’s favourite summer travel destinations. 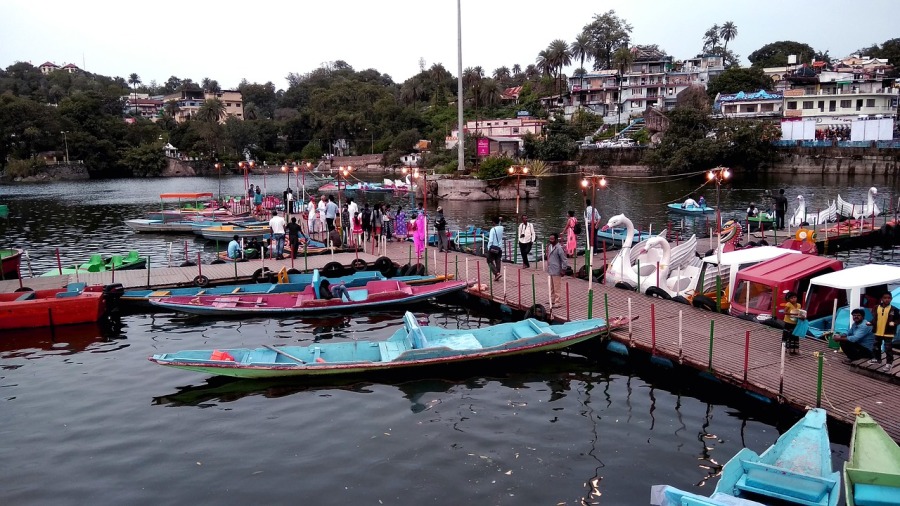 While most people go to Rajasthan in winters and visit the palaces and the national parks, there is one place that you can visit during the summers without experience the extreme Rajasthani heat. As most parts of the state bake in 45+ degree Celsius temperatures during the April-May season, Mount Abu is relatively cooler with a high of 30 and a low of 20. It isn’t exactly the cool Ladakhi weather, but it is the best possibility in the entire Gujarat/Rajasthan area. Mount Abu. While at Mount Abu, you can visit the various temples there and then relax at Nakki Lake (pictured above) during the evenings. If you are into spirituality, then the Brahma Kumari University will interest you. 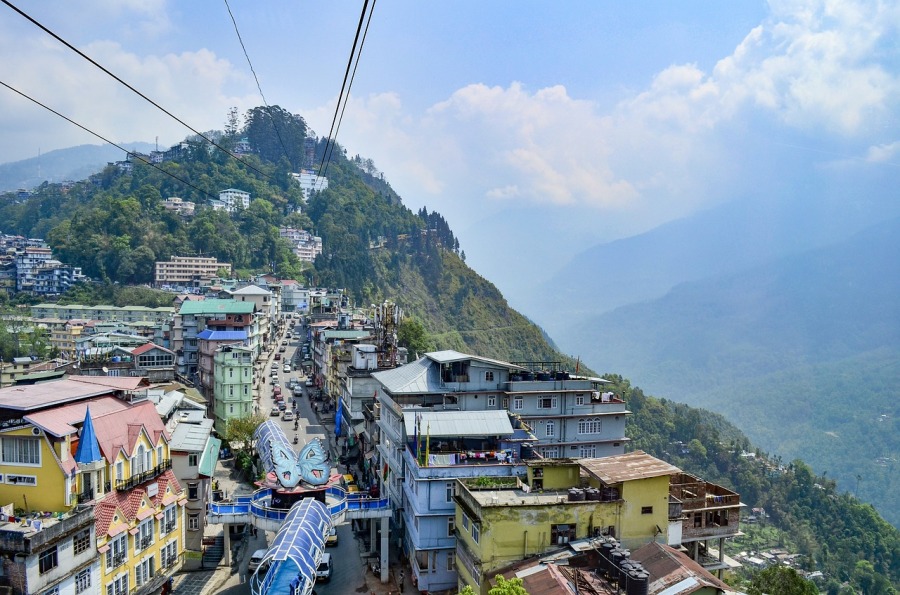 Sikkim is a hilly state in eastern India and it is a great place to visit during the summer. Temperatures in April and May tend to hit highs of 20 degrees Celsius and lows of 12 degrees Celsius. However, you will encounter short spells of rain in April and May. The good thing, however, is that March to May is blooming season and it is the best time to visit the flower valley in Yumthang. While in Gangtok, you can enjoy the scenic rope-way ride and explore the city. Then, you can head east to Tsongmo Lake and Nathu-La pass on a day trip. If you want to explore Sikkim further, then hire a taxi for a few days and head north to Lachung, Yumthang, and the beautiful Gurudongmar Lake. Pelling is also a scenic town. You simply cannot go wrong with a trip to Sikkim in the summer. 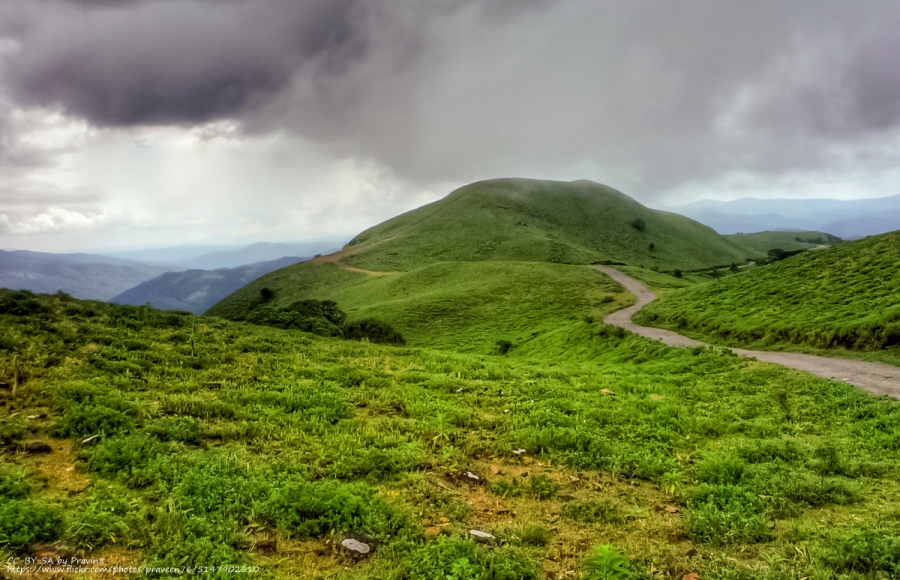 Coorg is a scenic district in Karnataka. It is a dream destination for a nature lover and a landscape photographer. There is plenty of colourful scenery here. The weather is also moderate during the summers and that is what makes it a decent summer travel option. The Abbey waterfall is known to have a reasonable amount of water even during summers. Outdoor lovers will like the variety of viewing points and trekking options in Coorg. There is an elephant camp here that you can visit as well. 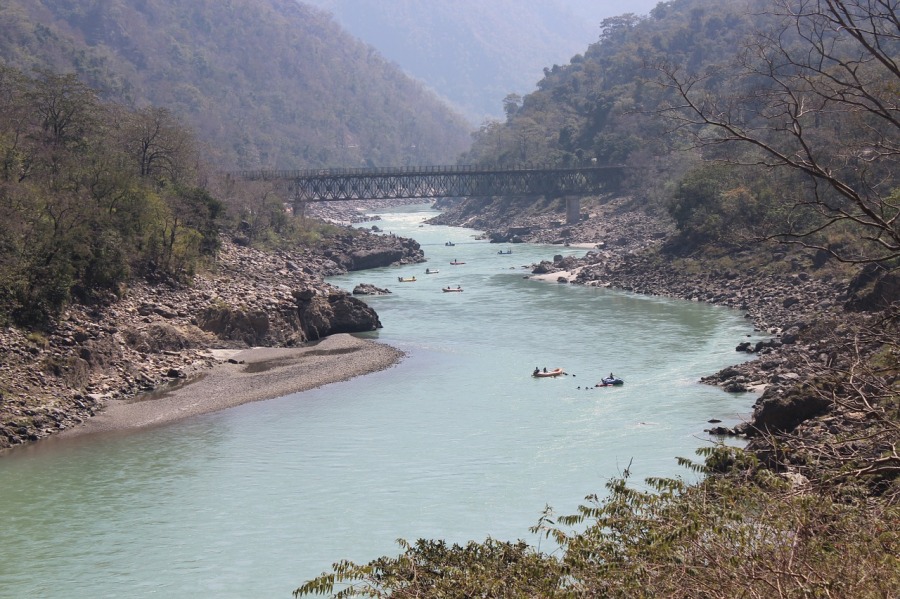 Rishikesh is a Himalayan city made famous by the Beatles when they visited Mahesh Yogi’s ashram a few decades ago. Today, it is known as the Yoga Capital of the World. There is plenty of spiritual tourism here. You can visit Triveni Ghat for a soothing and relaxing time or take pictures from the “Lakshman Jhula” bridge. Adventure junkies will like the abundant opportunities to go white water rafting, kayaking, rappelling, trekking, and rock climbing. There is even a bungee jumping service. For those wanting to study Yoga or get a teacher’s certification, there are Yoga academies that offer such courses. You can also go on a Yoga retreat for a week or two. Rishikesh has always been a great summer destination for Indians and foreign nationals.

Himachal Pradesh is home to some of India’s most incredible natural beauty and the most famous tourist destination in the state is the Spiti Valley. April and May are shoulder seasons for a visit to Spiti as the temperatures cross the zero-degree mark and the snow begins to melt during that time of the year. Hotels start opening up for the new season. Some of the roads are open while some are still closed. The road from Kaza to Manali opens fully only by mid-June. However, visiting Spiti in April and May means lesser crowds and emptier roads. You can travel to Spiti via Shimla during those months. Besides, you get to experience snow and take pictures of snow-capped mountains if you visit Spiti in April and May. Spiti is a great summer destination whether you visit it in April, May, June, or July. 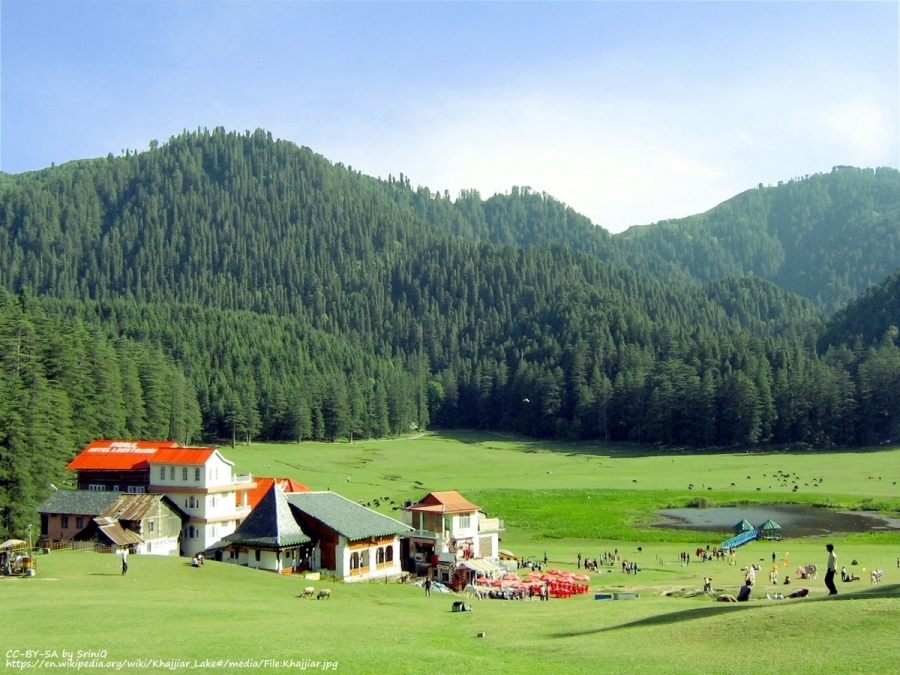 Khajjiar is also known as “mini-Switzerland” because its topography resembles that of the scenic European nation. Khajjiar is a hill station in Himachal Pradesh with highs of 20-25 degrees Celsius and lows of 15 degrees Celsius during the months of April and May. The main focal point of the town is a lush green flatland with Khajjiar Lake in the middle. The entire flatland is surrounded by a pine tree forest. The gentle slopes here mean that children and adults can indulge in fun activities like zorbing and rolling down the slopes without the fear of getting injured. There are some charming hotels and guest houses in the town where you can stay. Dalhousie is not far from Khajjiar and can be a great addition to your summer trip as well. 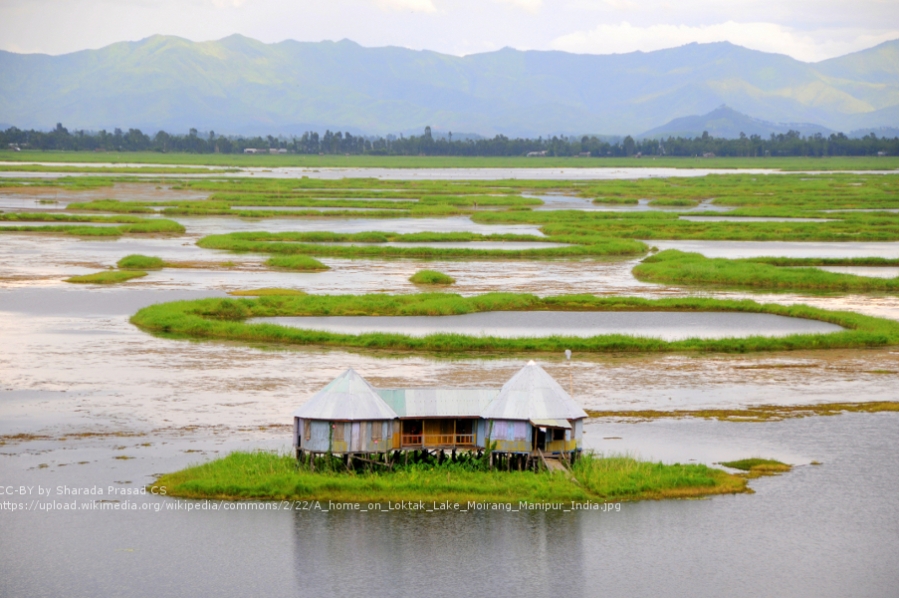 Manipur is one of the jewels of the north-east. It is a great destination for a summer trip because temperatures here are moderate. During April and May, you will experience highs of 27-28 degrees Celsius and lows of 16-18 degrees Celsius. The most famous attraction here is Loktak Lake. This lake is famous for its floating phumdis. Phumdis are natural vegetation which float on the lake water. In fact, there is an entire national park which floats. It is called Keibul Lamjao National Park and it is the world’s first and only floating national park. The chance to see such a unique natural phenomenon is reason enough to visit Manipur. 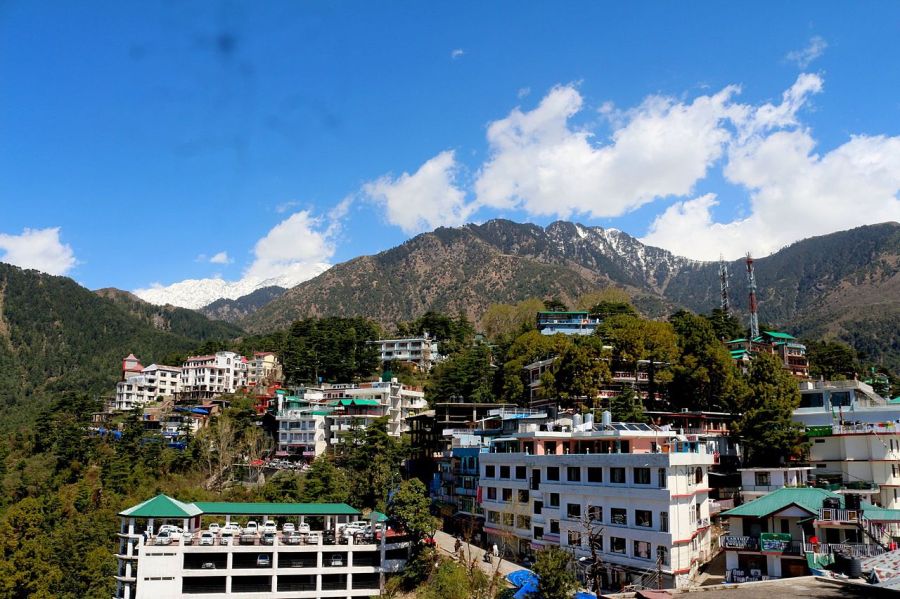 The seat of the Tibetan Government in Exile, Dharamsala is a hill station with plenty of Tibetans. The town has a unique hippy feel to it. It is located at an altitude of around 1500m which makes the temperatures there relatively moderate as compared to the rest of India. In April and May, daily highs can range between 26 and 30 degrees Celsius while lows can be 16 to 20 degrees Celsius. You can visit the Tibetan Museum, enjoy Tibetan cultural performances at the Institute of Performing Arts, enjoy eating Thukpa and Momos, and try meeting the Dalai Lama in person. You can also attend Yoga classes, volunteer, or simply relax in this laid-back town while you beat the summer heat. 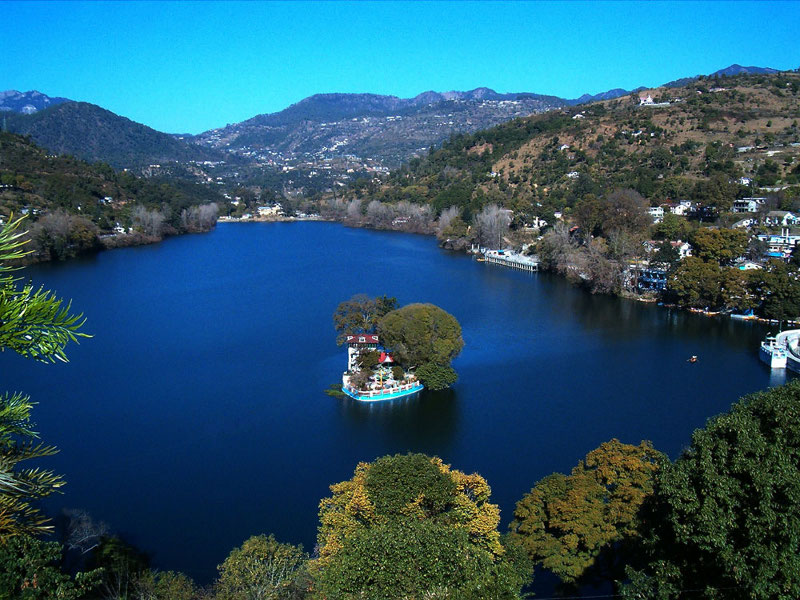 Nainital is a very famous hill-station in Uttarakhand. It is located at the Kumaon foothills of the outer Himalayas and has a daily high of 20 to 23 degrees Celsius in April and May. The pleasant summer weather is accompanied by scenic spots such as Naini Lake. Another lake known as Bhimtal (pictured above) is also a short 40-minute drive from Nainital. Jim Corbett National Park is also a 2-hour drive from here. The national park is famous for tigers, leopards, and wild elephants. The diversity of sightseeing options in and around Nainital and its moderate climate during the April-June season makes it a great travel destination during the summer.

Another gem of Uttarakhand is Almora. This town is about 2 hours north of Nainital. Interestingly, Almora is one hill-station which was developed not by the British but by the Kumaoni Indians. Temperatures in April and May can touch 30 degrees Celsius while the lows can go down to 20 degrees Celsius. There are plenty of temples and viewpoints in Almora.  Binsar wildlife sanctuary is about 25km away as well. With hill resorts in the vicinity and a calm peaceful ambience, Almora is a great place to unwind and take a summer break from your day-to-day routine.